Such a simple way of looking at life, but I think most of us forget this day to day. Life is short and only you can choose what you are willing to exchange a day of your life for. Choose wisely and choose carefully!

… and it took me on a trip down memory lane.

A little back story for all you readers out there –>

Mark and I had quite the start to our relationship. There is no saying this more eloquently: Mark Was My Boss/CEO/Owner of the Company. I had been employed at my first (subsequently only) big girl job for just about 3 months before I thought it was a perfectly acceptable and normal decision to start talking to Mark outside of work. It started out innocent enough (think dinners and nights out in downtown Cleveland) but fast forward 2 more months when I was sitting in my parents’ living room telling them that I had just quit my part-time job at The GAP and was going to quit my big girl job and temporarily move to Austin, TX with Mark and some of his friends to spend winter in a warmer climate.

Surprisingly, it didn’t go over as horrible as I thought it was going to go with my parents. They had their doubts [as any parent would] and frankly, so did I. But I was determined follow my heart on this one. I found comfort in Charice’s “Louder.” How I even heard this song for the first time is beyond me, but her lyrics “Let my hear speak louder than my head” really resonated with me at this point in my life. It was one of the craziest and best decisions I have ever made in my life. I hardly knew this person and yet here I was, quitting my job and moving across the country – away from my family and friends and the only support system I had ever known. 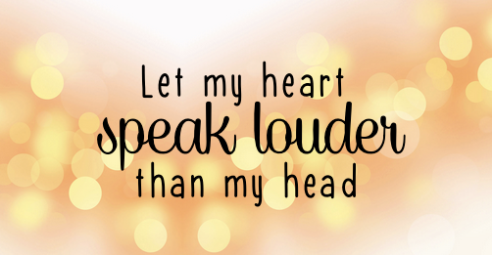 Of course Mark and I have had our ups and downs since that “move” to Austin almost 2.5 years ago, but each and every high and low have made us who we are.  Austin didn’t really play out like it was supposed to (another story for another day) but we had jumped right into a relationship not really knowing what we wanted out of it at first, but we slowly figured it out along the way.  See my Facebook post from 2012 below. See a theme emerging about following my heart here? I’ll get back to the present I bought myself here shortly, promise!

I recently went to Jewel Kade party and as I’m flipping through the catalog, a necklace jumps out at me. “Follow Your Heart.” It was one of those customizable necklaces where you can add a gem here or there and add whatever words you want to the pendants. Perfect. See the final product below! As soon as I saw it in the catalog I immediately thought of that FB post from Austin and I truly believe that if I hadn’t followed my heart  back in 2012, Mark and I would not be where we are today!

Where to start with this story?

Perhaps here: Mark is very busy with work. He is trying to get systems in place, people hired and ready to thrive in their roles and new initiatives planned out and ready to roll all before we leave for our RV Honeymoon. He can’t just walk away from his companies for a few months without putting in some serious time right now. That being said, he didn’t really have the time to plan a bachelor party and/or actually take time away from work to go on a bachelor party. A few weeks ago he had sort of decided that he was going to do a “post bachelor party” [he made this term up, it is NOT a real thing] and that was the last I heard about a bachelor party. Side Note: I was perfectly fine with the idea of no bachelor party 🙂

I first notice my brother, Jason in light blue. Weird. Why is Mark sending me a video that has my brother in it while on a work trip. Then I notice that I know all of these people sitting around the table. But they DO NOT BELONG TOGETHER. ever. for any reason. ever.

Turns out, Mark has some pretty great friends including his business partner and longtime friend Vinnie Fisher that planned a Surprise Bachelor Party on the tail end of this business trip! How Fun!! Everyone (who wasn’t already on this business trip) had flown in Thursday evening and was ready to party Friday-Sunday! They did the standard bachelor party heavy drinking on Friday night (I’ll spare you the onslaught of videos I received in the wee hours Friday night) but they also did some non traditional party things!

Outside the Google Office!

Some of the Group!

They visited the offices at Google, Nasa (one of Mark’s friends works there – wow!), took a boat trip around the San Fran bay and walked around Muir Woods! I’m told there was no drinking Saturday night because everyone was whooped from the night and day before! I’ll play along with that story for now….

It made me so happy to hear the surprise in Mark’s voice and the excitement to spend a few days with his friends. I’m so glad he got to experience a real bachelor party and not a “post bachelor party!” The only issue is: I was banking on his fall “post bachelor party” as a convenient excuse to have another girls weekend. So, I’ll have to work on a different approach to that.