We got up and were ready for a fun-filled day!

Stop 1 was Gillette Castle State Park. I, for some reason, thought this was going to be a really old castle. Apparently I was forgetting that the USA is not that old actually and that old castles only exist outside of the USA. This castle was built in like the 1930s which is still cool, but not cool.

After walking in, we asked the tour guide person who actually owned the castle. She looked at us like we were crazy for not knowing and told us “Mr. Gillette.” Well yes, we kinda figured that out. So we had to ask her who exactly he was. She was not impressed with our knowledge, or lack thereof. Turns out he was an actor who played played Sherlock in a play.. I think. I guess we should embrace some wikipedia before the next tour! As Mark and I were walking up to the castle, we both asked each other if we thought this Gillette guy was the guy behind the razor. SO glad we didn’t open with that question to the tour guide!! At $6 to get inside the Castle – it was a good way to spend the afternoon! It is also a State Park so I’ll assume there are some trails and other stuff you could do here as well. We didn’t stick around to check it out tho. 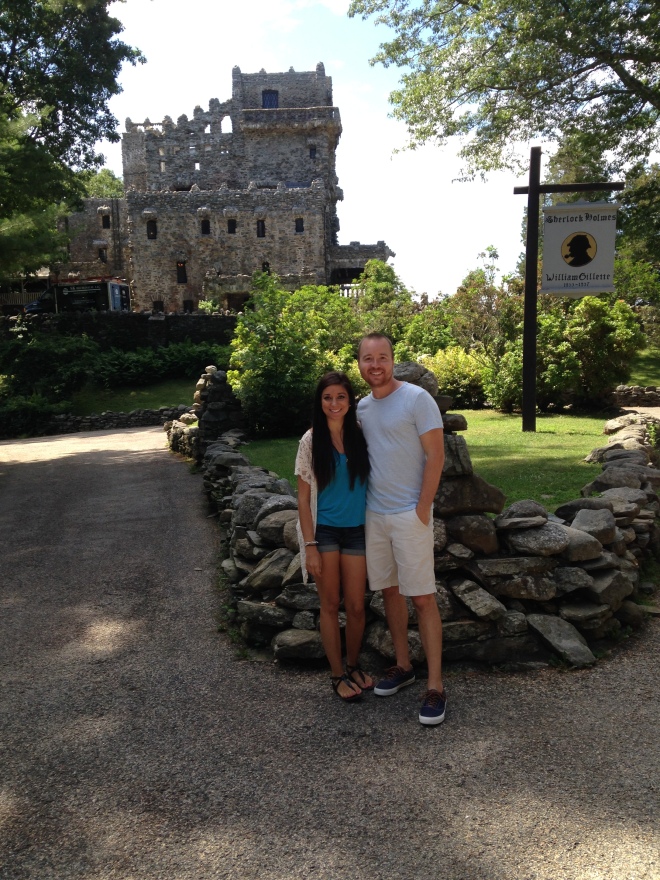 Outside the Gillette Castle 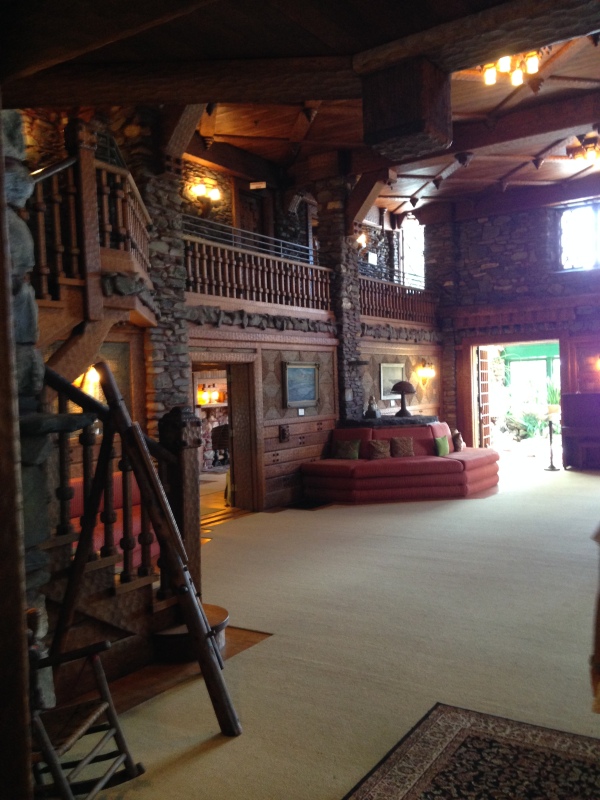 The interior of the Castle

view out of a patio from the castle

the doors were so fun at the castle! 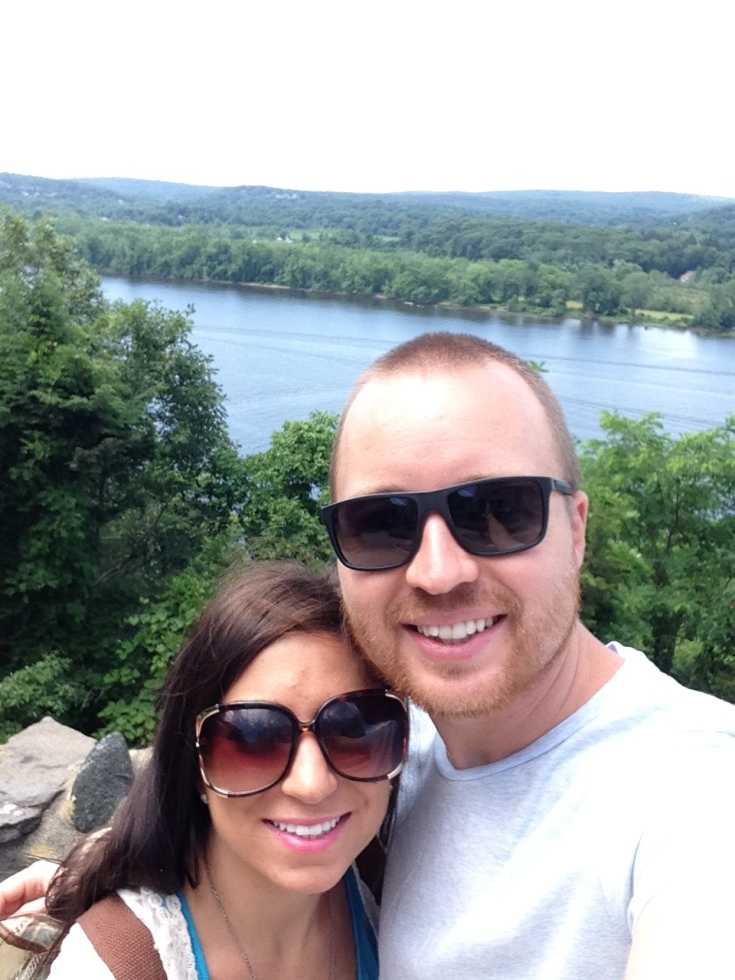 just us being cute and stuff!

After we were castled out, we headed for some lunch! It was time for some more lobster rolls according to Mark. We headed to Abbot’s Lobster in the Rough. This little restaurant has the perfect set up. Right on the water with boats and views! When you walk up, there is a big sign that says something  like: please be patient as your food is still alive when you order it and we need time to cook it. I guess that’s cool, but kinda creepy too. Anyway, we found ourselves a nice table right by the water and waited for our # to be called. Mark ordere a whole lobster which after it was served, I realized I was not okay with. I ordered crab legs even though I am well aware that crab comes from Alaska and not the Atlantic Ocean. The lunch was good, but really all they did was boil some crab legs & a lobster. We also has lobster bisque and some deviled eggs which were average – but the view outranks it all!

Mark outside of Abbott’s

our table right by the water! 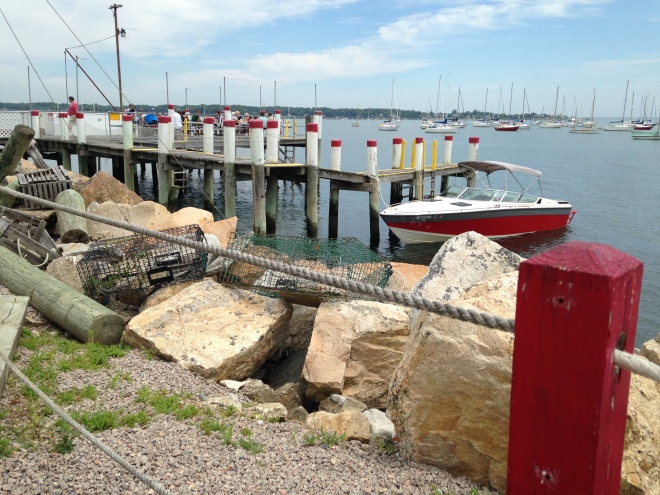 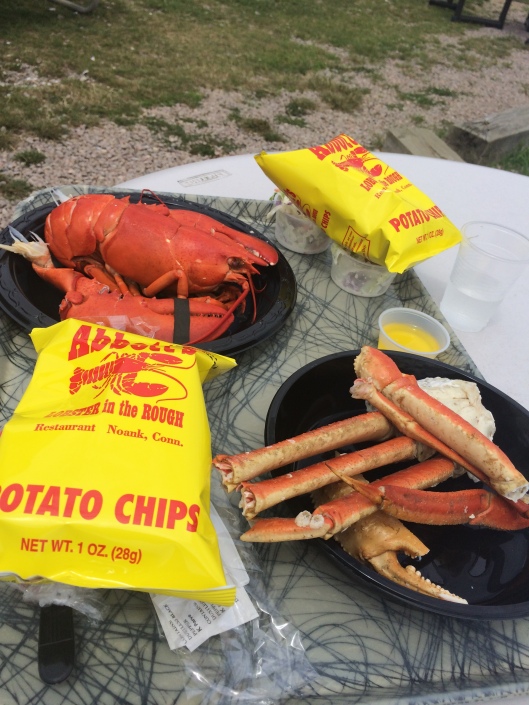 We then went to Mystic Seaport and walked around the little city center for the rest of the day. Oh and we stopped at winery too! Fun Fun Fun. Now for bed! We going to hunker down and work for the next few days. Stay tuned for more adventure soon!

Be back soon!!! #RVhoneymoon
Enjoying some lunch at Abbott's!! Cute little casual dining place right on the water!! Can't wait!! #abbotslobsterintherough #lobster #oceanside #lobsterroll #Connecticut #noank #RVhoneymoon #roadtrip
Taking the ferry over to Connecticut today! So begins our east coast journey!!!
Loving our time in the Hamptons so far! Right now we are at the Montauk Point Lighthouse waiting to walk to the top! #Montauk #TheHamptons #longisland #MontaukStatePark #rvhoneymoon
Stan chillin at our first State Park! Thanks for having us #wildwoodstatepark! Can't wait to explore Long Island today and tomorrow!! #NewYork #LongIsland #RVhoneymoon #StatePark #EpicRoadTrip #RoadTrip #HomeIsWhereYouParkIt
Hanging with my friends at #SeasideHeights! Mark does not get my interest in this!! His loss! #JerseyShore #MTV #Snooki #YouCanTakeAPicWithTheDuckPhone
Happy Fourth from us!! Heading to Seaside Heights to see what it's all about!! #HappyFourth #4thOfJuly #Freedom #RVhoneymoon #RVlife (although we are in the car currently 😜) #RoadTrip